In 2010, there were 67 new posts, growing the total archive of this blog to 156 posts. There were 23 pictures uploaded, taking up a total of 6mb. That’s about 2 pictures per month. This does not count the photos embedded from Flickr which was done with regularity.

The busiest day of the year was August 13th with 582 views. The most popular post that day was Feast Your Eyes: Shrimp Tapas in Garlic Butter (Valencia, Spain). The photo from that post is above.

Where did they come from?

The top referring sites in 2010 were foodbuzz.com, networkedblogs.com, facebook.com, twitter.com, and mail.yahoo.com.

These are the posts and pages that got the most views in 2010.

One thought on “2010 in Review – WordPress Stats are Pretty” 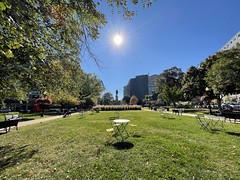